Lions and Tigers and Bears: The Internet Strikes Back (Oh Myyy! #2) - George Takei 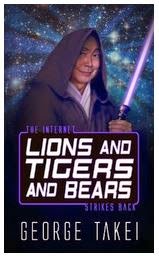 Who doesn't love George Takei? The guy's everywhere on social media these days. His Facebook page has millions of fans (including me), and his hilarious posts on everything from Star Trek puns to Amazon product reviews often go viral in a matter of minutes.

And what do you know -- Uncle George is an indie author, too.

This book is a sequel to Oh Myyy! There Goes the Internet, which was about his first year on social media. In this one, Takei talks about some of the lessons he's learned in his second year on Facebook. He devotes chapters to the causes to which he's lent his considerable star power: marriage equality, LGBT rights, and awareness about the US internment of Japanese-Americans during World War II. And he laments that fans complain when he posts an occasional plug for one of his enterprises -- this book, for example.

He also doles out some secrets to his success that other indies could take to heart -- to wit: Post stuff that will keep people coming back to your page; don't beat your fans over the head with promotional posts; and police your page -- try to keep the discussions civil, and don't feed the trolls. (Of course, unlike most indies, Takei has a staff to help him with all of this. And his fame precedes him; Star Trek gave him visibility that most of us can only dream about.)

If that's not enough, Uncle George reprises many of the memes that have graced his Facebook page over the past year or so, and a lot of them are still funny. For that, if no other reason, I thought Lions and Tigers and Bears was worth the price.
Posted by Lynne Cantwell at 6:00 PM