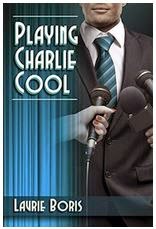 Charlie Trager's back, and this time he's playing for keeps.

Playing Charlie Cool is the sequel to Boris's novella The Picture of Cool (her novel Don't Tell Anyone fills in the timeline between the two), and features the same main characters: Charlie, producer of a TV talk show; and Adam Joshua Goldberg, former New York City mayor's aide, who resigns from that job when he announces he's gay. He and his wife subsequently split. But Adam -- or Joshua, as Charlie calls him -- is leery of making his relationship with Charlie public. For one thing, he and his soon-to-be-ex have two kids. For another, Josh comes from a political family, and his father the senator wants him to run for Congress.

Charlie's head-over-heels for Joshua, but he's getting more and more tired of waiting in the wings. How long will it be before Mr. Producer Man loses his celebrated cool?

I loved this book. Boris does such a great job at portraying both Charlie and Josh that you just can't help but hope that they can figure out a way to be together. One of my favorite scenes is the transatlantic phone call during which they hash out Joshua's big speech in Geneva. It shows that their relationship isn't just about the sex -- there's respect there, too, as well as love.

Yes, Playing Charlie Cool features two gay men as its protagonists. But it's a love story for everybody.
Posted by Lynne Cantwell at 6:00 PM