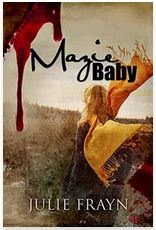 Mazie Baby is a well-written story of domestic abuse and, eventually, redemption.

Mazie Reynolds has been married to Cullen Reynolds for many years. At first, he loved and even worshipped her. But his behavior has spiraled down over the years until now, Mazie finds herself walking on eggshells to avoid setting him off. Even so, his temper explodes too often -- and when it does, Mazie is often seriously injured, and must explain away her injuries as clumsiness to medical authorities, and even to her daughter Ariel.

But unbeknownst to Cullen, Mazie has been documenting everything for the past several years. Finally, she snaps. She means only to give him the same sort of treatment he has been giving her all these years, but instead she goes too far and kills him. Then she and Ariel hit the road on a journey across Canada to hide from the authorities and start a new life. Along the way, she finds personal strength, and a support system she never knew was there.

Frayn is a gifted writer. Her descriptions of Mazie's torture at Cullen's hands make her suspicion of those who claim to want to help her all the more believable. I was pulling for Mazie and Ariel all through the book, but especially at the end. Which was perfect, and perfectly believable.

Mazie Baby is not an easy book -- some of the descriptions are graphic -- but it's a rewarding read in the end. Highly recommended. And I'll be looking for more from this author.
Posted by Lynne Cantwell at 6:00 PM