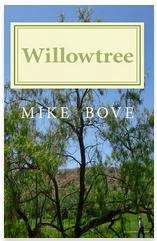 In Willowtree, we meet an unlikely sleuth -- a retired mailman (can we still call them mailmen?) named Bruce DelReno. Bruce is retired and living in a little town in Arizona called Willowtree, where he plays a lot of golf, and more or less keeps house. His wife Genny still works as an on-call nurse for a nursing agency -- which is to say that she has a part-time job with full-time hours at a lot of different places. So Bruce is in charge of most of the cooking and housekeeping, and of taking care of their dog.

Everything's going along great -- until the dog discovers a body in the wash on the local golf course. Before long, our retired letter carrier is unofficially helping the local cops with a murder investigation. It turns out that another body was found at nearly the same location many years back, and Bruce figures the two incidents might be related. Eventually, a whole host of characters is involved -- including a crazy old guy, one of the people who works for the golf course, and Bruce's least favorite golfing partner.

I enjoyed the book, although our hero is a bit long-winded at times. I could have done with fewer instances of Bruce recounting all the stuff he did that day that didn't have anything to do with the murder investigation. His day-to-day chores got so much attention that I half-expected the bad guys to attack either Bruce's wife or his dog, or both, before the story was up. Thankfully, that never happened. Wait, was that a spoiler? Hmm. Guess you'll just have to read Willowtree yourself and find out.
Posted by Lynne Cantwell at 6:00 PM