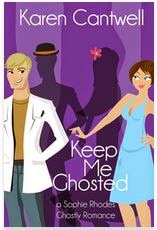 Come on -- with a last name like that, I had to read at least one of her books. (To be clear, I've never met Karen Cantwell, and as far as I know, I'm not related to her.)

Sophie Rhodes is a young woman with a problem. For starters, she needs a job. But besides that, she's haunted -- by a veddy British gentleman ghost named Marmaduke Dodsworth. Marmi has been known to get her into scrapes in the past. But in this particular instance, he turns out to be useful. Because Sophie's new employer -- a cute optometrist named Dr. Callahan -- is also haunted. His office is afflicted with a banshee that just won't go away.

Sophie and Marmi do their best to rid the office of the ghost, with plenty of paranormal hijinks and romance along the way.

I found Keep Me Ghosted to be a light, fun, and entertaining read. It's not a genre I would normally pick up, but I did enjoy this book. And if you're the sort who likes light, fun paranormal books, then I'd say go for it.
Posted by Lynne Cantwell at 6:00 PM