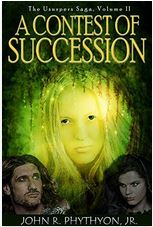 With A Contest of Succession, Phythyon returns us to the land where his earlier epic fantasy, The Sword and the Sorceror, takes place. A couple of the characters from that book are also in this one: Liliana Gray, the bumbling magician's assistant who turned into a powerful sorceror after her patron, Gothemus Draco, was murdered; and Draco's murderer, the former Lord Vicia of Elderburg. Vicia was stripped of power after Liliana thwarted her attempt to take over Elderburg. Now Vicia has joined forces with a horde of goblins to take over the neighboring city-state of Twin Falls. The elderly duke there has died without an heir, so there's to be a contest to see who is best suited to take over the rule of Twin Falls. Vicia intends to win, and she intends to cheat. Because there really is an heir to the dukedom: a soldier by the name of Garrick Tremaine. Vicia wants him dead, which suits the goblins just fine -- they need his life essence to free their horrible god, Gruul, from his enchanted prison. It's all going swimmingly until Liliana rescues Garrick from the goblins, and then decides to help him win the contest.

The story is interesting, and I very much like Liliana and Garrick. But I had two problems with the book. First, the author over-explains things. Readers don't need a recap of all of the pertinent events in the story every time the point-of-view character changes; it bogs down the action. And second, the book ends without any of the big plot points resolved. It's not exactly a cliffhanger, but the author has left a whole lot of important stuff up in the air -- to be resolved, I assume, in the next book.

If you don't mind that sort of thing, then I would recommend A Contest of Succession. It's not necessary to have read The Sword and the Sorceror first -- Phythyon does a fine job of filling in enough back story so that readers new to the series won't be lost.