Our Souls at Night - Kent Haruf 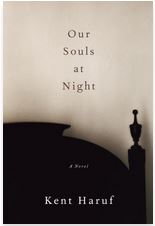 This novella -- Kent Haruf's last -- is a bittersweet reminder of what the literary world lost when he died last November.

The story is set in Haruf's fictional plains town of Holt, Colorado. This is the first sentence: "And then there was the day when Addie Moore made a call on Louis Waters." It's as if the good ol' boys down at the mercantile are swapping stories: "And then there was the time that...." That tone -- a little sly humor, a lot of empathy for the characters -- carries through the book.

You see, Addie is calling on Louis to make him a proposition. Both are widowed and elderly, and Addie thinks maybe Louis wouldn't mind coming to her house at night to sleep in her bed with her. Just to talk, you understand. Maybe hold hands. But just to have a body on the other side of the bed. Just for comfort.

Louis decides to give it a try. Before long, he and Addie are an item -- and not long after that, their grown children (who all live elsewhere) hear about it and, scandalized, do their best to break them up.

That sounds more madcap than it is. There's a tender heart to Haruf's writing, and a serious side, too, as demonstrated by the way Addie and Louis step up to parent Addie's young grandson while the boy's parents sort out their marriage. When Addie's disapproving son takes the boy home, it's as heartbreaking a scene as any death.

Perhaps my favorite scene is Haruf's nod to his own works. Addie and Louis are discussing a new play to premiere in Denver that's based on Haruf's novel Benediction, as well as the plays based on his earlier books, Plainsong and Eventide. All three of those novels are set in Holt, and our characters talk about how the author made everything up except the town's physical details. (The plays, in fact, have been staged in Denver.) Louis says he can't imagine the events in those books actually happening. But Addie says, "It might happen. People can do the unexpected."

They can indeed. For instance, a dying man can give us one final gem of a book. Thanks, Mr. Haruf.
Posted by Lynne Cantwell at 6:00 PM

Email ThisBlogThis!Share to TwitterShare to FacebookShare to Pinterest
Labels: Kent Haruf, Our Souls at Night, review