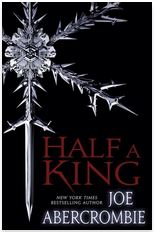 I got sidetracked from my plan to review one trad-pubbed book a month, didn't I? Now here it is, September. This year's World Fantasy Convention is happening in just two months, and I still have a whole stack of dead-tree books from last year's book bag that I haven't read. The Kindle is just so much more convenient... Anyway, I took this one along with me on vacation a few weeks ago, and ended up liking it very much.

Half a King is YA epic fantasy. Our protagonist is Yarvi, the younger son of the king and queen of Gettland, who was born with a deformed left hand. Without two good hands, he is useless at most things involving physical labor -- including fighting -- and so is deemed a weakling by his father. But Yarvi has a quick mind, and he is training for the ministry (somewhere between magic wielder and royal adviser) when he learns that his father has been killed in a raid. Yarvi's elder brother is also dead -- which means Yarvi is now king. Or half a king, as he tells himself bitterly -- too crippled to lead his people effectively. Or so he believes.

Regardless, his uncle forces him to lead a raid of vengeance on a neighboring king. Treachery ensues, and Yarvi ends up sold into slavery as an oarsman on a pirate ship that sails the Shattered Sea. Yarvi must somehow escape and make his way back to Gettland before he can see justice served.

I liked Yarvi, despite the fact that he comes off as a whiner in a good chunk of the book. He's always picking on himself because of his disability, but perhaps it's excusable. He's just parroting all the people around him who are telling him the same thing. The plot is tight, the treachery believable. And Abercrombie throws in a few twists along the way that I should have seen coming but didn't.

I think readers of epic fantasy would enjoy Half a King.
Posted by Lynne Cantwell at 6:00 PM

Email ThisBlogThis!Share to TwitterShare to FacebookShare to Pinterest
Labels: Half a King, Joe Abercrombie, review