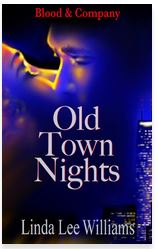 If you like your romance with a bit of a bite, you may like Old Town Nights.

Ambrose Slater is part of a family that has run the popular Slater's Bakery chain in Chicago for many years. But the real family secret is that everyone in the family is a vampire. In the world of this novel, vampirism is hereditary. Those who suffer from the condition can withstand sunlight, although they burn easily. And they can eat and drink regular food, but they also need blood -- preferably human blood -- to survive.

Ambrose has his eye on a woman named Abby Lawrence. He spotted her in a park one day as her boyfriend was yelling at her, and was smitten at once. Ambrose wants her for his own, but he's certain Abby will never agree to marry a vampire. So he decides his best course of action is to kidnap her.

That's right -- he's a stalker and a would-be kidnapper. But really, deep down, he's a good guy. And Abby does fall for him, with help from a few love bites. But the real drama begins when she realizes that he wants to have children -- babies to whom she would have to feed blood as well as milk.

I had a few problems with the editing. It seemed to me that there was too much telling and not enough showing. Also, Williams begins too many of her sentences with an -ing verb, and at times the construction doesn't make sense. The -ing form indicates an action that's ongoing. "Kicking off her sandals, she rested her feet on the coffee table" implies that she put her feet up while still in the act of taking off her sandals -- which I suppose is possible, but probably not what the author meant to say.

Does that make sense? Maybe it's just me. If that sort of thing doesn't trouble you -- and if you like vampires and romance -- then maybe Old Town Nights is for you.
Posted by Lynne Cantwell at 6:00 PM