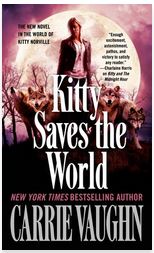 Now this is more like it. With Kitty Saves the World, Carrie Vaughn wraps up her 14-book urban fantasy saga, and she does it perfectly.

Kitty Norville, werewolf and Denver late-night radio talk-show host, has put out a tasty bit of bait for the vampire who wants to rule the world. The idea is to lure Roman, a.k.a. Dux Bellorum, out of hiding so that Kitty and her allies can trap and kill him. The vampire bites, you might say, but the assassination attempt fails -- and it's now clear that Roman is making his final moves in the vampires' Long Game. The head of the vampire coven in Denver passes a message to Kitty -- leave town now, or you and your family are dead. At the same time, she receives an offer out of the blue from a shady producer to put her radio show on TV, but only if she moves to California. What a coincidence, huh?

I've said before that with this series, Vaughn had me at Denver and radio. In this final book, she puts Kitty back in her natural setting -- the radio show, the werewolf pack's territory, and her life with husband Ben. It reminds the reader of everything Kitty personally stands to lose if she can't defeat Roman.

I skipped over book 13 of the series because Kitty wasn't the main character. While some readers seemed to think that book was crucial to understanding what's going on in this final volume, I didn't feel like I missed out on all that much.