Kidnapped by Nuns, and Other Stories of a Life on the Radio - Bob Fuss 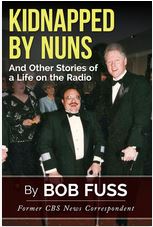 I'm not a fan of memoirs, as a rule. But when I heard Bob Fuss had written one, I had to read it -- partly because (here comes the Six Degrees of Separation moment) I worked with Bob at Mutual/NBC Radio News, and knew him to be an outstanding journalist, as well as an entertaining guy. (No, he doesn't mention me in the book. Although he does talk about the "talented people working at these networks (who) were told they were being laid off" when the owners merged the Mutual/NBC news operation in the DC suburbs with CBS News in New York in 1998, and I was one of those people.)

You may not think you know who Bob is, but if your favorite radio station carries CBS News at the top of the hour, I'm certain you would recognize his voice. For decades, he was the network's Congressional correspondent. He also covered political conventions, presidential campaigns, and the odd disaster and/or coup.

Most of the chapters are straight past-tense memoir, but interspersed here and there are travelogues written in present tense, radio style. Bob has traveled a great deal, both for his job and for fun, and some of his observations had me laughing out loud. For instance, when touring Chilean poet Pablo Neruda's home, Bob writes of Neruda's tchotchkes, "The collection of items from around the world was quite impressive, as was his 'Stalin Peace Prize,' which is not something you see every day." No kidding.

In later chapters, he indulges in opinions about politicians of his acquaintance that would have gotten him canned if he'd said them in public twenty years ago. Back then, as he notes, journalists were required to avoid showing any bias; we had to keep our opinions to ourselves. Of course, things are different today.

He also talks candidly about his disability, and makes it clear that it has never slowed him down.

I give Bob a lot of credit for sticking it out in radio longer than I did -- that layoff in '98 did me in, but he didn't retire 'til last year. His book made me nostalgic about the business, though. Radio was a lot of fun, back in the day. If you're interested in radio, or in journalism, or in politics in Washington, or in travel to exotic places...oh, heck, just read the book. Highly recommended.
Posted by Lynne Cantwell at 6:00 PM