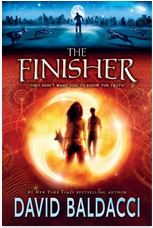 Baldacci is best known for his adult thrillers, none of which I have read. The Finisher is his first YA fantasy. And if you guessed this was the first of a series, you'd be right. (The second book should be available shortly, if it's not already.) The main character is Vega Jane -- Jane being her last name. She lives in a village called Wormwood, which no one ever leaves. She and her younger brother live in a sort of boarding house since their parents went into a catatonic state, more or less, after Vega's grandfather had an Event -- which means he went poof! and disappeared. Vega's best friend is a boy named Delph, who stutters. Her brother goes to school and she works in a factory called Stacks, where she and a man named Quentin Herms finish all the things manufactured there. They sand rough edges and paint pretty statues. And then one night, Vega sees the local constabulary chase Quentin into the Quag -- a mysterious barrier that surrounds Wormwood. No one who has gone into the Quag ever comes out again.

So already, you know that Vega is going to have to enter the Quag before the book is over. But before that, she will come into her own power, and deal with the town bullies -- not the least of which is Morrigone, a member of the town council, who starts out friendly enough but who clearly has her own agenda.

While the protagonist is a strong female and while the plot included some surprises, the story struck me as a fairly predictable hero's journey. Vega is provided with magical tools with which to unlock her own magical potential, solve some puzzles, beat the bad guys, and progress through to the next level. Baldacci has picked such weird names for things in this world -- people are Wugs, minutes are slivers, days are lights (which makes for a nice "lights and nights" pairing, actually) -- that I had to wonder whether the story wouldn't morph into sci-fi before it was over. And it still might; I expect it'll be a trilogy before all is said and done.

This book is nearly 500 pages in hardback, but it's a fast read (for adults, anyway). I'd recommend it for kids who have finished the Harry Potter books and who are looking for something a little different, but not too different.
Posted by Lynne Cantwell at 6:00 PM