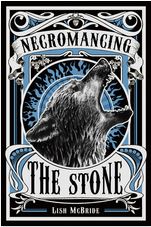 Just in time for Samhain/Halloween, I bring you a trad-pubbed urban fantasy whose main character is named Samhain.

Samhain is Sam LeCroix, a former short-order cook and son of a local witch, who has only just recently realized he's a powerful necromancer. He's dispatched his hometown's former head necromancer, Douglas Montgomery, and has thereby inherited Douglas's house, gnomes, gargoyles, and houseboy -- a pukis named James. Sam is a nice guy, and isn't crazy about succeeding Douglas, who was definitely not a nice guy and who ruled mostly by fear and intimidation. Sam is new to his powers, and he's in love with Brid, the daughter of the local head werewolf. All of which makes him vulnerable. And as it turns out, Douglas isn't quite as dead as he ought to be -- and he's very interested in re-acquiring a little green stone that's stashed away in the house that now belongs to Sam.

This is the second book in the series, but I don't think you have to read the first book to enjoy this one. I figured everything out quickly enough and was never very confused.

I was, however, a little bit disappointed. I spotted this book in a bookstore and was excited pretty much right away. The title's a pun on the movie Romancing the Stone, after all, and the title of the first book in the series is a pun, too (Hold Me Closer, Necromancer -- and if you don't know that reference, I'm very disappointed in you). The blurb made it sound like the plot would include one madcap complication after another. In short, I was expecting a story along the lines of Jasper Fforde's Tuesday Next series. Or at least a heaping helping of snark. And then the author didn't deliver, and I was sad. I mean, it was okay. Just not what I was expecting.
Posted by Lynne Cantwell at 6:00 PM