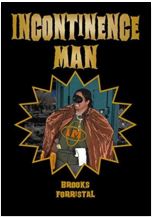 I'm not much of a connoisseur of graphic novels, but I thought Incontinence Man was a gas.

Oh, all right. I'll try to avoid bathroom humor in the rest of my review, even though the book is full of it.

Our hero, Luke Payne of Payne Manor, is a rich playboy whose days as a crimefighter in disguise are numbered, due to some rather severe gastro-intestinal issues. His trusted servant Alfreda makes him a deal he can't refuse: see a doctor, and she'll make him a new costume in poop brown (to hide the inevitable mishap). And just in time, too, because there's a new supervillain in town -- and the crafty creature might have ties to Luke's doctor. (Gasp!)

It's clear Brooks and Forristal had a ball creating this Batman send-up. The artwork started out as real photos that were cartoonified. And if you've never read a graphic novel on a Kindle, you may be pleased to know that Amazon has built in a pop-up feature that isolates each dialogue balloon and presents them to you in order. That's a boon to those of us who find ourselves somewhat challenged when reading comics. Not that I ever have that problem.

Incontinence Man Number One was such a fun read that I'm hoping Number Two is already in the works. (Sorry, I couldn't resist one more.)
Posted by Lynne Cantwell at 6:00 PM