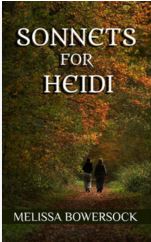 Sonnets for Heidi is a heartfelt tale in which what-might-have-been becomes a way forward.

Trish has a lot on her plate. She lives in the San Fernando Valley with her boyfriend Eric; they have a great relationship, but Trish had an abusive first marriage and is leery of getting married again. She is also coping with the recent death of her mother -- and the responsiblity for her aunt Heidi that her mother's death has thrust upon her. Trish feels guilty about putting Heidi into a care home, even though Heidi has Alzheimer's and the care home is a great situation for her. Still, she does her best for Heidi, which is more than the woman's son has ever done for her.

Then suddenly, Heidi too dies. And in going through her aunt's things, Trish stumbles onto a family secret -- one that will take her back to her hometown in Pennsylvania, and will introduce her to a woman Heidi never forgot.

Bowersock is a wonderful writer, and here she has brought her characters to life in a kind and loving way. My mother suffered from dementia before she died, and I recognized many of Heidi's behaviors as the coping skills they were -- and I felt for Trish, who always seemed to cope with them with grace. And the way she honored her aunt's memory at the end was marvelous.

I highly recommend Sonnets for Heidi for any reader who enjoys character studies of strong women, and for those who need to be reminded of how oppressed women were in the first half of the 20th century.

***
I received an Advance Reader Copy of this book, and am providing an honest review in exchange.
Posted by Lynne Cantwell at 6:00 PM