To Kill a Mockingbird - Harper Lee

From the ridiculous to the sublime, more or less. 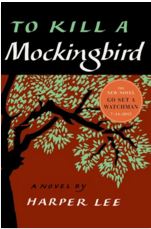 A few weeks ago, I admitted on Facebook that I'd never read To Kill a Mockingbird. Several people I respect told me that I ought to, because it's a wonderful novel. So I ordered a copy.

Little did I know how timely our discussion was. Harper Lee died a week ago, on February 19th, 2016.

I won't do a big rehash of the plot, as I suspect it's pretty well ingrained in the American zeitgeist by now, but here's the elevator pitch: Eight-year-old Scout learns a lot about life in her small Alabama hometown when her father, Atticus Finch, is appointed to defend a black man accused of raping a white woman.

I have to tell you that I nearly set the book aside -- the first few chapters were pleasant, but didn't really hold my interest. (Although I suspect I would have been more interested had I known that Truman Capote was Lee's model for Dill.) It wasn't until Chapter 9 or so, when Atticus's defense of Tom Robinson began to seep into the kids' awareness, that the story began to get interesting for me. I found the trial to be fascinating but its outcome unsurprising -- although the final outcome of Tom's story did catch me by surprise.

As a writer, I admire the way Lee began the book with Jem's broken arm, and then made me forget all about them until the big reveal toward the end. And I thought she did a great job with making each character identifiable, despite the size of the cast.

I suspect I've come to the book too late in life to consider it a touchstone or moral guidebook, as some readers do; I came to Scout's conclusions about race on my own, decades ago. But I found To Kill a Mockingbird captured its place and time quite well, and I can see now why it got the attention it did as the civil rights movement of the '60s was getting underway. Highly recommended for those who want to know what mid-century America was like, back before we tried to kid ourselves about how we're a post-racial society.
Posted by Lynne Cantwell at 6:00 PM

Email ThisBlogThis!Share to TwitterShare to FacebookShare to Pinterest
Labels: Harper Lee, review, To Kill a Mockingbird