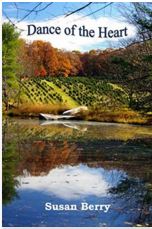 I am not a huge fan of sweet romances. It's not the lack of sex that bothers me; it's the conspicuous consumption -- the big houses, the luscious food, and so on. Just not my thing. But lots of readers like them, and they may very well like Dance of the Heart.

Our heroine is Maggie Campbell, who fled home after her mother's death, and who has been enticed into returning by the prospect of her beloved grandmother's 90th birthday. Upon Maggie's arrival, she discovers that a handsome fellow by the name of Desmond Kinsley has somehow wormed his way into the bosom of her family. Everyone seems to love him -- including her grandmother. Maggie smells a rat, especially after learning how entwined Desmond is in her family's financial affairs. When her grandmother falls ill, Desmond once again makes himself indispensable to her family. And even as Maggie falls for him, she can't help but wonder whether they're all making a big mistake.

The plot is fine, and so are the characters. Maggie is adorably klutzy when necessary; Desmond is the wealthy man of mystery who may or may not be romantically available. The supporting cast was pretty well fleshed out.

However, I saw some continuity problems. For one thing, as Maggie entered the ballroom for her grandmother's birthday party, I didn't realize the room was already full of people until the crowd reacted to Desmond's entrance. Then later in the book, a number of scenes take place in her grandmother's house, but often I wasn't clear which one the author meant -- whether it was her actual house, or Desmond's carriage house where she was convalescing. Also, distances seemed somewhat elastic. I didn't have a good sense of how close all of the houses were to one another. Some indication along the lines of "Grandmother's house was X minutes' walk from Desmond's" would have helped me a lot.

And there were quite a few typos in the version I read, as well as some repeated text that should have been excised in the editing process. Overall, I'd suggest another round of edits would strengthen the book.

***
I was given a copy of this book in exchange for an honest review.
Posted by Lynne Cantwell at 6:00 PM

Email ThisBlogThis!Share to TwitterShare to FacebookShare to Pinterest
Labels: Dance of the Heart, Moments of the Heart, review, Susan Berry