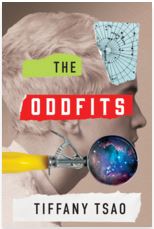 The Oddfits is an oddly charming story of a young man who finds his place in the world almost by accident.

Murgatroyd Floyd is eight years old, a blond-haired, blue-eyed Singaporean boy. He loves his English expat parents, never noticing how cruel they are to him. He's bullied at school, and his only escape is an ice cream shop whose owner takes a shine to him. For the ice-cream shop owner, Yusuf bin Hassim, senses that he and Murgatroyd share a special ability: they are Oddfits, who can travel from everyday reality, or the Known World, to a place called the More Known World.

Due to a twist of fate, Murgatroyd loses his chance to meet his destiny and continues living in Singapore. At 25, he's still living with his parents, who still treat him poorly; he works for a restaurant, but the owner almost treats him worse than his parents do; his best friend is not as good a friend as he could be; and Murgatroyd continues to be oblivious to it all. Then, at last, he meets another Oddfit, and is finally given the chance to travel to the More Known World. But leaving turns out to be harder for Murgatroyd than it should be -- because none of the people he's closest to want to lose their doormat.

Tsao gives her speculative-fiction piece a literary turn. Nearly every character has a backstory, and the action often skids to a halt while the author spends a page or two describing someone we've just met. Not that the book is particularly action-packed; the pivotal scene is almost a tableau, as Murgatroyd's parents sit motionless while their son finally figures out what's been going on all his life.

Still, it's a charming book. Murgatroyd is a nice guy, and I was pulling for him hard at the end.

If you're the sort of reader who likes roundabout tales with quirky characters, you might enjoy The Oddfits. And if you end up liking it a lot, you'll be glad to know that more volumes in the series are on the way.
Posted by Lynne Cantwell at 6:00 PM