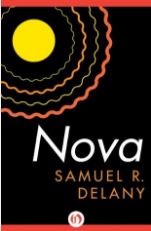 Basically, I was shamed into reading Nova. Well, maybe not shamed, exactly. But a number of friends, upon learning that I'd never read anything by Samuel R. Delany, strongly suggested that I read this book.

Nova won the Hugo Award for Delany in 1968. It's a space opera about a good-guy space captain named Lorq van Ray and his quest to find a plentiful source of Illyrion, the element that makes space travel possible. He believes he can generate it by sending his ship through a nova, so he assembles a ragtag crew and heads for his destiny. Compounding the danger are his nemeses, Prince Red and his beautiful twin sister Ruby. The Red family currently controls the largest viable source of Illyrion, so if Lorq succeeds, the Reds will be ruined. But Prince Red's hatred of Lorq goes back much farther, to their shared childhood. In short, Lorq is the good guy, Prince is the mentally unbalanced bad guy, and Ruby is the siren whom Lorq is in love with -- although there are hints that her relationship with Red, and her fierce loyalty to him, are more than just brotherly love.

But some of the most interesting parts of the story involve the members of Lorq's crew, most notably Mouse, a gypsy from Earth who plays a remarkable holographic synthesizer called a syrynx; and Katin, a Harvard-educated fellow who is knocking around the galaxy to tour moons while he gathers material to write a novel -- an archaic storytelling device that nobody bothers with anymore.

Much has been written about Nova's use of metafictional techniques: Lorq's whole voyage is a grail quest, and two crew members (Lynceos and Idas) are named for two of Jason's Argonauts. Also, the Tarot figures prominently -- and interestingly, in this society the Tarot is considered to be not only accurate, but worthy of scientific pursuit.

My friends were right -- Nova is worth your time. Recommended for fans of space opera, as well as for anyone interested in serious science fiction.
Posted by Lynne Cantwell at 6:59 PM