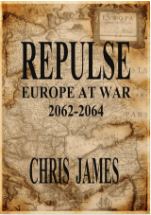 The novel opens with a bit of a sketchy tale about how this manuscript purportedly fell into the author's hands. Then it goes full-out into history mode, recounting -- from a vantage point nearly 80 years into the future -- the details of a European war that hasn't happened to us yet.

James has done a crackerjack job of world-building, imagining a future where technology is far advanced: medical nanobots make short work of battlefield injuries, brain scans of captured soldiers reveal the enemy's plans, and cities destroyed in battle are rebuilt in a matter of months. The bad guys in this world are a secretive Third Caliphate that intends to destroy the Christian infidels in a reverse Crusade. It's up to a scant few military geniuses to develop the tech necessary to beat back the threat.

The tone is dry, as befits a "history," but those who like reading about military strategy and gee-whiz technology should enjoy this book.
Posted by Lynne Cantwell at 6:00 PM