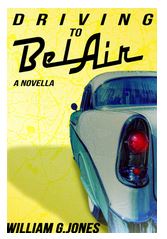 This novella grew on me, the farther I got into it.

The main character is Dale, who has escaped the chaos of his upbringing in a motherless household in Indiana and now lives in New York with his girlfriend.  But when his father dies, he travels home for the funeral.  There he reunites with his older brother, who is hostile to him for abandoning them; his younger brother, who's stoned most of the time; and his former girlfriend, who clearly still carries a torch for him.

Things get really interesting when Dad's will is read.  The boys' father wants them to take his ashes to BelAir, Florida, and dump them in the ocean.  There's a catch, of course; the boys must drive there in Dad's 1950s-vintage Chevy.  And somehow, Dale's New York girlfriend and his old flame end up going along for the ride.

As you might expect, things don't go smoothly, but that's half the fun.  As this band of misfits lurches from one mishap to the next, Dale learns a lot about his brothers, his girlfriend, and himself.

Driving to BelAir is a pretty quick read -- 148 pages on my Nook.

***
I'm embarking on a road trip of my own next week, so Rursday Reads will take a short sabbatical.  See you back here on June 6th.
Posted by Lynne Cantwell at 6:00 PM