The Round House - Louise Erdrich

In honor of Independence Day weekend, you'd think I'd review another book by an independent author, wouldn't you?  Well, I'm not.  Instead, I've picked a book whose characters are perhaps not so glad that we beat the British. 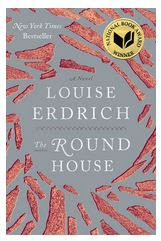 The Round House won the National Book Award last year, and it's easy to see why.  Erdrich is at the top of her game, wrapping humor and pathos into a wonderful book that's part coming-of-age story and part whodunit.

Joe Coutts is a thirteen-year-old Ojibway boy who lives on a reservation in North Dakota with his father, a tribal judge, and his mother, whose job it is to evaluate applications for tribal membership.  One day, Joe's mother is sexually assaulted and nearly killed, near the round house of the book's title.  She retreats into despair, refusing to give anyone enough details about the crime to help them find her attacker.  So in the first part of the book, we watch the family torn apart as Joe and his father try to cope with both her reaction and their own grief and anger.

Eventually, the story comes out, and Joe becomes privy to details that perhaps he shouldn't, given his age.  He gets it into his head that it's going to be up to him to find the attacker, and he and his best friends -- Cappy, Angus and Zack -- go out looking for clues.  As it becomes increasingly clear that the perpetrator will walk, Joe decides it's up to him to see justice served.  And that's when the book becomes more than either a coming-of-age story or a whodunit and becomes something pretty amazing.

Much of the injustice in the story is due to the fact that the victim is Indian and doesn't know where the assault occurred. State, federal, tribal and private land all come together near the site, and the fact that state and federal authorities are unlikely to prosecute the crime is described as matter-of-factly as the fact that the whites who used to run the local grocery store would routinely charge their Indian customers more.

I've read a number of Erdrich's other books, but The Round House is definitely one of my favorites.
Posted by Lynne Cantwell at 6:00 PM