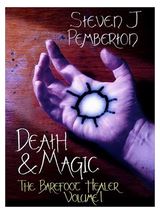 Looks like I reviewed this one on Goodreads awhile ago -- February 2012, to be precise.  Let's fire up the Wayback Machine and see what I said (oooh, four stars - I must've liked it!):

Apprentice wizard Adramal, daughter of a well-known wizard, is shipped off to a new magic academy, where her father won't hamper her magical growth. On her way, she finds herself involved in a murder investigation. The authorities believe a wizard has committed the murders -- something wizards are sworn against.


I remember saying something about this book to a friend who went, "Oh, magic student gets sent to a magical academy.  Must be a Hogwarts ripoff." And I remember thinking, well, no, not at all.  Adramal is adept enough that the authorities reluctantly bring her into their investigation, into a murder that happens in a nearby village.  The school is set up differently from Hogwarts. And Adramal herself is no goggle-eyed magical newbie.

So my verdict is that it's worth a look.  And hey, I see here that the author has written a sequel.  Guess I'll have to add it to the TBR pile.
Posted by Lynne Cantwell at 6:00 PM