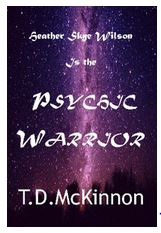 This is kind of an odd book.  I would put it squarely in the sci-fi quadrant of the speculative fiction roundhouse, except for a "whoa!" twist at the very end that kind of made me wonder what McKinnon was on when he wrote it.  And I mean that in a good way.

Here's the setup: Heather Skye Wilson is the daughter of two diplomats for World Unity, an organization which seems to have superseded the United Nations since the world's three biggest monotheistic religions have more or less destroyed each other.  (You see why I was intrigued initially.)  So Heather is a well-traveled diplomatic brat.  But she's also got a highly-developed psychic ability that causes her to regress to past lifetimes.  When this happens, she is actually inside the head of the person she was, but she retains her modern-day knowledge. So she is able to influence the actions and decisions of these past selves, and makes life better for those around them.  At the same time, some of the people she visits in these past lives are adults, with adult experiences -- experiences that she lives right along with them.

When World Unity catches wind of how adept she is at this sort of thing, they pretty much beg her to join their peacekeeping force. One of her first missions is to rescue a friend (who might become more than a friend) from a cult centered around the birth of a new Messiah -- the sort of cult that World Unity believes will bring about a return of religious war and the eventual destruction of the planet.

McKinnon has written a ripping yarn.  I recommend it.  And when you get to the last few pages of the book and go, "whoa," let me know what genre you think it ought to go into.
Posted by Lynne Cantwell at 6:00 PM