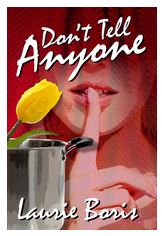 I was initially reluctant to read this book.  Not because of the subject matter -- I've read several books in which somebody has cancer, and it didn't put me off of those.  No, what worried me was that Don't Tell Anyone was going to turn into a borscht-belt comedy. Jewish humor has never been my thing.

As it turned out, I needn't have worried.  Laurie Boris wouldn't do that to me.  Not even with a crotchety, cancer-ridden 65-year-old Jewish mother at the center of the action.

Estelle Trager has been keeping her breast cancer a secret from her two sons and her daughter-in-law.  And she's been in denial, using that ol' magical thinking to justify it.  She watched as her mother and grandmother both died from the disease, and believes the treatment is worse than just dying from it already.  Not that she actually plans to die of cancer.  No, she's got a better idea. She wants her daughter-in-law, Liza -- who Estelle once described as "a godless hippie raised by wolves" -- to kill her.

A horrified Liza refuses, of course.  But then she keeps Estelle's request a secret, adding it to the pile of things she hasn't told Adam, her husband.  Among the other things in that pile are Liza's true feelings for Adam's brother, Charlie, with whom she does share Estelle's request.

There's more, of course, but I don't want to spoil it all for you.  Just don't let the subject matter scare you off -- Don't Tell Anyone is a wonderful book.
Posted by Lynne Cantwell at 6:00 PM