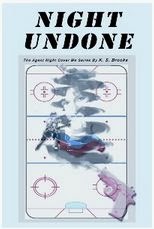 I wanted to get this review in before the Sochi Olympics ended, for reasons which will become apparent in a minute.

First off, this is neither a mystery nor a thriller. It's a love story about two people who happen to be spies.

When we last saw Agent Kathrin Night here at Rursday Reads, she was young and lethal, a globe-trotting spy for a United Nations agency. In this book, she is older and wiser -- and she's nursing a career-ending injury. She's also falling hard for Aleksey, the Russian agent sent by his government to keep an eye on her, and he's falling for her, too. But she's having trouble allowing herself to be vulnerable enough to admit that she loves him, let alone that her spying days are at an end. Agent Night, vulnerable? No way!

Aleksey sort of tricks her into seeing a psychiatrist who specializes in helping ex-military members adjust to civilian life. In the midst of her treatment, which isn't going fabulously well, he's called back to Russia -- but not before sharing his deepest secret with Kathrin. She wants to help him find peace with himself, and so she concocts a scheme to get them both hired on as security guards for the Winter Olympics in Vancouver.

Kathrin mistrusts everyone who tries to help her -- the psychiatrist, her landlord in Vancouver, even Aleksey. I love that, because it makes sense, given that she has always prided herself on her independence. Accepting help is difficult for anyone used to taking care of themselves; I can imagine it would be worse for someone used to trusting no one in order to stay alive.

My favorite scene might be the one in which Aleksey returns from Russia -- in the middle of the night, without calling first. Without giving too much away, I'll just say that Brooks' sense of timing here is excellent: Kathrin goes on the offensive, which makes Aleksey go on the offensive. The scene would have been hilarious, if I hadn't been so aware that they were quite capable of killing each other.

Night Undone is an exciting, touching, and timely read.
Posted by Lynne Cantwell at 6:00 PM