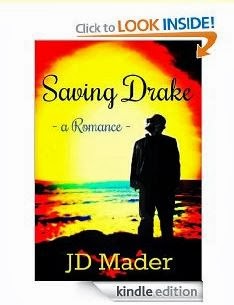 Romance isn't in Mader's typical wheelhouse -- he usually writes gritty noir stuff. So as you might expect, Saving Drake isn't your typical romance.

Rachel meets Drake at a party. They hit it off immediately, but Drake is gun-shy about relationships -- the love of his life died in a car wreck with him behind the wheel. But Rachel is patient, and slowly, Drake comes around. Only then does she realize what she's gotten herself into with him. Then she must decide whether she loves him enough to help him conquer his demons.

Mader calls Saving Drake a "real love story," and in many ways, it is. Both characters are awash in imperfections -- as is Rachel's best friend, a randy woman who decides to conduct her own investigation into Rachel's new guy. Drake's problems with alcohol seem realistically portrayed, and the love story between the diner owner and his wife is poignant and perfect.

Two things, though. Well, three. First, I wish Clyde had made at least one more appearance later in the book -- it would have driven home Drake's anguish about his dead love that much more. Second, while the romance genre pretty much requires a "happily ever after," I wanted at least a hint that it might not be all smooth sailing for Drake and Rachel from here on out. And finally, there's a lot of alcohol in this book. A lot of alcohol. If it's a problem for you, you've been warned.

For me, though, those are all minor quibbles. The prose is stunning, as always in Mader's work; the relationships are realistic and believable; and on the whole, I very much liked Saving Drake.
Posted by Lynne Cantwell at 6:00 PM