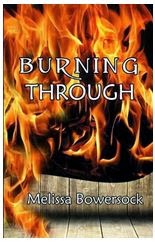 When Jennifer and Robert Stinson bought the restored Victorian home in their new town, they had no idea about its troubled past. But the house is a perfect fit for them, as it becomes apparent in a hurry that their marriage is in trouble, too. Robert, who's in sales, is angry that he's been transferred to this podunk route in the middle of nowhere. Jen, for her part, loves the house, and seems happiest when Robert's out of town and she can concentrate on her online antiques business.

And then the fires start.

Things in the house seem to catch fire spontaneously, with no apparent cause. Each time, Jen sees a mysterious older woman near the scene of the fire, but she always disappears before Jen can catch her. She begins looking into the house's history -- and she also finds herself looking forward to seeing a particular fire captain who shows up with his crew each time they have a fire. With his help, she begins to get to the bottom of the house's mystery. But she runs the risk of seeing her whole life go up in smoke.

Bowersock does a great job of portraying the Stinsons' unraveling marriage. The unexplained fires often seem to be sparked by Robert's explosions of rage, and it's clear -- to this reader, anyway -- that the paranormal energy in the home is feeding off of his anger. I also liked the way Bowersock handled the budding relationship between Jen and Chris, the fire captain.

There's a twist at the very end that I didn't expect, but Bowersock makes it work. She's a wonderful writer, and I very much enjoyed this book.

***
I received an advance copy in return for an honest review.
Posted by Lynne Cantwell at 6:00 PM