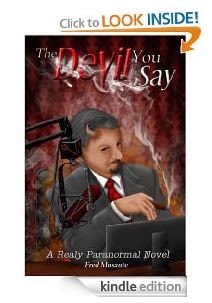 The elevator pitch for The Devil You Say might be this: Rush Limbaugh meets The Exorcist. And if you're a dittohead, you'll probably hate this book.

This is Musante's second outing for Mike and Ethan Realy, fraternal twins roped into becoming paranormal investigators due to an odd clause in their father's will, and Mike's girlfriend Noelle, who's a karate expert. They're hired by conservative talk-show host Mike Baxter to investigate a ghost haunting Baxter's bunker-like mansion. Our heroes discover pretty quickly that the "ghost" is actually a demon that's been set loose on Baxter by one of his enemies. Not like a guy like Baxter would have enemies. The brothers enlist an Italian priest to conduct an exorcism -- and that's when the fun really starts.

I liked Mike, the first-person narrator, who cracks wise at the drop of a hat. I liked the team's politics, and how they're working for Baxter while holding their noses at the stream of hateful comments he spews on the radio from his in-home studio. As a Pagan, I was a little uncomfortable with the emphasis on Good vs. Evil and how easily the author reached for the usual suspects (voodoo is evil, demons exist, etc.). But hey, it's a comic novel -- it's not meant to require either deep thought or an examination of theological tropes.

As a reader, I thought the plot was well-paced and the situations believable. But I thought the priest's accent was overdone; wading through his dialogue slowed me down and even required re-reading in a few instances.

The author is calling this urban fantasy. I'd be more inclined to categorize it as contemporary fantasy with a paranormal twist. But no matter. The Devil You Say was a quick, fun read.
Posted by Lynne Cantwell at 6:00 PM