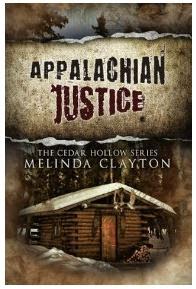 Appalachian Justice begins in the present-day, as an old mountain woman is breathing her last in a nursing home in Huntington, WV. Billy Mae Platte's mind drifts back to the events that shaped her life in 1940s Cedar Hollow, WV.

Life was never easy for the half-Irish, half-Cherokee young woman. Orphaned young, she finds herself irresistably attracted to her best friend Corinne. An ugly incident involving Corinne's brother and some of his buddies, all of whom have just returned from World War II, forces Billy Mae to flee up Crutcher Mountain. There she lives alone -- until she learns that one of the men who raped her is sexually abusing a young girl left in his care. Billy Mae must find the strength to protect the girl and herself, and enact justice in her own way.

Some readers who are unfamiliar with Appalachian speech patterns might have trouble with Billy Mae's narrative voice, but as someone who has lived in the Mountain State, I can tell you that Clayton got it just right.

I found Appalachian Justice to be a gripping read. The 1940s storyline ended satisfyingly, and in the only logical way. Good stuff. I'm looking forward to reading the rest of this series.
Posted by Lynne Cantwell at 6:00 PM