In the Absence of Light - Susan M. Strayer 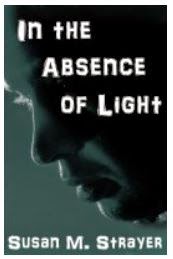 (Full disclosure: the author is my editor, and I was a beta reader for this book.)

Shiloh is an autistic boy with a knack for solving puzzles. His father works for the government on a top-secret project. His best friend, Calliope, wants to be a Shakespearean actress.

Just a normal family, right? But then Shiloh's world turns upside down. His father is captured by government troops that behave like an invading army. Their laser-like weapon renders Calliope almost catatonic. Shiloh believes the only person who can help his friend is his dad, so he takes her along on a cross-country trek to rescue him. Their only guide is a book that Shiloh's dad filled with puzzles that only Shiloh knows how to solve.

Before it's over, Shiloh will come to doubt everything he thinks he knows -- including his own memories.

In the Absence of Light should please anyone who enjoys reading YA dystopian fantasy. I can't wait to read the sequel.
Posted by Lynne Cantwell at 6:00 PM

Email ThisBlogThis!Share to TwitterShare to FacebookShare to Pinterest
Labels: In the Absence of Light, review, Susan M. Strayer