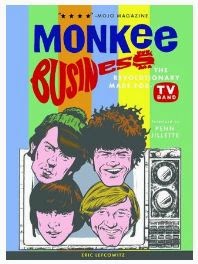 Alert hearth-myth readers know by now that I was a huge fan of the Monkees when I was growing up. I was eight years old when the TV show hit the airwaves on Monday nights (yes, kids, "The Monkees" was originally a prime-time show). I had a huge crush on Davy; Peter was my second favorite.

Then the show went off the air and the band broke up, more or less, and I kind of grew out of them. But everything old is new again, if you live long enough. I attended a Monkees concert last summer, and that rekindled my interest in the Prefab Four. So I picked up a copy of Lefcowitz's book. It's billed as the definitive biography of the band -- with good reason: it's just about the only one out there. Lefcowitz does a pretty good job with fleshing out the backstory behind the Monkees. I was somewhat disappointed to learn that Davy was a bit of a jerk in real life (the show was conceived as a star vehicle for him from the start) and that he and Peter never really got along. I guess it's just as well that I never made to Hollywood to meet them.

I was saddened, but not surprised, to learn how the band mates were kicked to the curb by Bob Rafelson and Burt Schneider after the TV show made them a fortune. Jack Nicholson has the Monkees to thank for his career; Rafelson and Schneider used money they made from the show to produce "Five Easy Pieces" and "Easy Rider" -- movies that made Nicholson a star.

This edition has been updated through Davy's death in 2012 and the subsequent reunion tour featuring the three surviving Monkees.
Posted by Lynne Cantwell at 6:00 PM