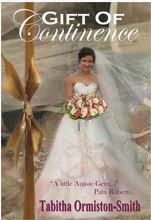 Fiona McDougall has found the perfect wedding dress. So her marriage to her fiance Tim should be perfect, too, right? Alas, things go pear-shaped from the start. The wedding itself is a disaster, Tim hates Fiona's cat, Fiona knows nothing about keeping house...and then, just as things could hardly get more absurd, she discovers Tim may be sleeping around.

The word continence in the title, as it turns out, doesn't have anything to do with Depends (which is what both Fiona and I thought to start with). It means faithfulness. Spouses are supposed to give each other the gift of being faithful to one another. And Tim is faithless in any number of ways.

To be honest, I was hot and cold on this book. I'm not a fan of chick lit anyway, and while Fiona's ditziness is supposed to be funny, I found myself cringing a fair amount of the time -- particularly when her friends and family repeatedly told her what an idiot she was. Nearly every line of dialogue directed at her starts with some variation on, "Christ, Fiona, could you be any more of a moron?" A little less of that attitude would have made me much happier.

Also, so much of the first half of the book was played for laughs that when Fiona first discovered Tim was stepping out on her, I wondered whether it wasn't another of her flights of fancy. But no, Tim really was that much of a jerk. And he did get a satisfying comeuppance in the end -- which did a lot to salvage my opinion of the book.

The book is impeccably edited, and I did get a few laughs out of it. If you're a fan of comic chick lit, you'll probably love Gift of Continence.
Posted by Lynne Cantwell at 6:00 PM