Happy 2015! It's still the holidays, right? So it's not too late for a winter solstice-related book. 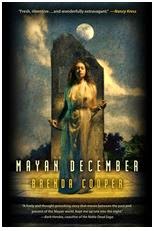 You all know how near and dear to my heart the subject of the 2012 winter solstice is. So when I saw this book in the dealers' room at this year's World Fantasy Convention -- on clearance, no less -- I grabbed it.

The main characters of Mayan December are Dr. Alice Cameron, an archeoastronomer, and her preteen daughter Nixie. They have traveled to the Yucatan for the big page-flip on the the Mayan calendar -- as have a bunch of other serious scholars, assorted end-of-the-world believers, and a number of heads of state, including the President of the United States. Alice gets drafted to give tours of the ruins to the bigwigs, leaving Nixie in the care of a young woman named Oriana.

Then Nixie ducks into a Mayan ruin on the grounds of the resort where they're staying, and steps hundreds of years back in time. She is there in the past for just a short time, but long enough to give a young man modern-day money for a quetzal feather, which she carries back to 2012 with her.

Her mother, who's a woman of science, has a hard time believing her daughter. But then it happens again. And again. Eventually it becomes clear that with the approach of the solstice, the veil between the two time periods is thinning. Others from our time have found themselves in this past era, too -- a drought-plagued time on the cusp of the European "discovery" of Mexico. And you can bet the solstice will be an important date for people in both eras.

Cooper's story was intriguing, and she has clearly done her research into Mayan culture. I didn't fully buy into Alice falling for Ian, an acquaintance of Oriana's; I wanted a little more romance there, a little more of Alice unbending, to make it more believable. But Nixie was a wonderful character, and the magical scenes were suitably magical. I found Mayan December to be worth the read, even now.
Posted by Lynne Cantwell at 6:00 PM