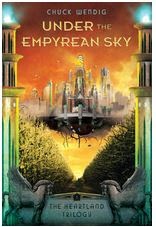 Cael McAvoy and his friends live on a radically different Earth than ours today. In this future time, the ruling class has moved to a flotilla of cities in the sky, leaving the lower classes to live on the surface of the planet and farm corn. But this corn is nothing like the plant we know. It's been genetically modified into an invasive species that seems almost sentient, and its fruit is not safe to eat.

Cael and his friends have built a hovercraft out of spare parts, which they use to look for remnants of the old civilization to sell for extra ace notes. But Cael is an angry young man -- mad at the mayor's son, who seems determined to wreck his salvage business, and mad at his own father, who seems resigned to life in the Heartland, where people die of horrible diseases and things never seem to get better. He's also scared of losing his girlfriend Gwennie when they both come of age and the government picks their spouses.

Then he and his crew find real food -- healthy, edible fruits and vegetables -- growing in the middle of a cornfield. That's when things get really interesting.

Wendig has taken the headline-grabbing topics of GMO crops and the 1%, and melded them into an excellent YA dystopian tale. I heartily recommend Under the Empyrean Sky. The second book, Blightborn, is already out -- and now I'm wondering why I haven't started it yet. I should get on that.