We'll get back to reviewing indie novels next week. I spent a little time over the holidays working on my dead-tree TBR pile, and this book was one of them. I thought I'd review it while it was fresh in my mind. 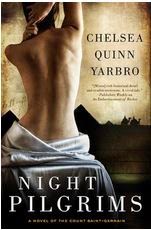 I've been following Yarbro's series starring the Count Saint-Germain for nearly 30 years -- and the author has been writing them for longer than that. Night Pilgrims is the 25th novel featuring the vampire. Each of the books puts Saint-Germain in a different historical period; he lived in Transylvania, of course, but also in Rome during its heyday, in China during the time of Marco Polo, and in Egypt during the days of the pharaohs.

This book is set in northeastern Africa during the early 1300s, when Christian pilgrims from Europe would risk life and limb to travel to sacred sites in what's now Ethiopia. Also in those days, Islam was making a play for the same territory, and Christians might find themselves attacked, enslaved, and/or conscripted into an Islamic army.

As the book opens, Saint-Germain and his faithful servant, an equally long-lived ghoul named Rogerian, have taken up residence near a Coptic Christian monastery. As the political climate near the monastery heats up, Saint-Germain -- who is known these days as Rakoczy, Sidi Sandjer'min -- signs on as translator for a band of pilgrims. Their leader is a military man doing penance for accidentally killing Christians during the Crusades. Among the others in the caravan are a couple of adventurers, an overly-pious nun, and the nun's sister-in-law, Margrethe, who is on pilgrimage to pray for a cure for her ailing husband back in Aquitaine.

The little band faces a number of challenges, including the rigors of crossing the desert and the dangers of traveling during the Nile's annual flood. Saint-Germain faces the additional burden of hiding his vampire nature from the pilgrims. He can survive on animal blood, but he thrives on biting women when they're in the throes of passion. Margrethe is attracted to him, but she's both strait-laced and married, and it would be difficult for them to hide a relationship from the other pilgrims. Not to mention that it would make her pilgrimage worse than pointless.

I was dismayed to find a number of editing issues in this book. However, Night Pilgrims was a pleasant enough read, and fans will be relieved to know that Saint-Germain and Rogerian make it out...well, not alive, but...oh, you know what I mean.
Posted by Lynne Cantwell at 6:00 PM