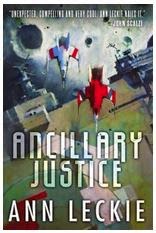 I picked this up on the recommendation of several friends who thought it was one of the best books they had read last year. And it won both the Hugo and the Nebula, as well as a host of other awards.

Ancillary Justice is sci-fi. The main character, Breq, was once Justice of Toren -- or rather, the artificial intelligence, or AI, that ran the Radchaai troop carrier Justice of Toren. Or part of it, anyway. In this world, the ship's AI is also implanted in all of the servants/slaves/troops on the ship. All of them know everything the ship knows, and the ship knows and sees everything each of its segments knows and sees. But the thing is that each segment was once human. The Radchaai captured them in their conquests of new worlds, put their bodies on ice, and now thaws them and connects them to the ship's AI when it needs a new segment. Only the officers aboard the ships are independent beings -- and even they are tied to a vast patronage system that leads to the Lord of the Radch, Anaander Minaai.

As the book opens, Breq stumbles across a former lieutenant of his in a place he should not be. Lieutenant Seivarden lost her -- um, his -- command a thousand years ago. For reasons Breq cannot explain to him/herself, he/she takes Seivarden under his/her wing. It's a problem because Breq's on a self-appointed mission to kill Anaander Minaai.

I'm vague about the genders because of a quirk in the Radchaai language. It does not differentiate between gender, and so Breq refers to everyone he/she meets as "she". It was an interesting stylistic choice for Leckie to make; it immediately makes it clear how alien the Radchaai are, but it makes the book somewhat tough going. I found myself assuming that every character was female, and I constantly had to work at keeping track of which character was what.

Despite that, I enjoyed the book. Leckie tackles some ticklish sociological questions in an interesting way, and I expect I'll continue reading the series to find out what happens next. Recommended.
Posted by Lynne Cantwell at 6:00 PM