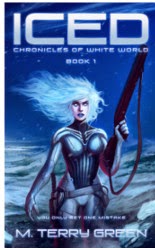 I thoroughly enjoyed all of the books in Green's Olivia Lawson, Techno-Shaman series, so when I heard she was beginning a new series, my hand immediately went up for an ARC. And I'm glad I asked, because this one promises to be just as good.

The series is set on a future Earth after the next Ice Age has begun. It's unclear to me whether it's a natural phenomenon, or whether some kind of nuclear winter set it off. Either way it's very cold, and there are apparently few human survivors. They have retained enough technology, and developed additional tech, to cope with living in such a cold climate. But still, falling on the ice is tantamount to a death sentence.

Unfortunately, barbarism has survived, as well. Thirteen is a young woman who was previously some kind of slave (which kind becomes apparent partway through the novel). She has somehow procured a skimmer -- a sort of hovercraft for flying over the frozen Pacific -- and she has made it her business to attack slave ships, kill the crew, and free the cargo of slaves by handing over the ship to them. She has an ulterior motive: she's looking for information about her sister, from whom she was separated when they were both made slaves. But she is a thorn in the side of the nation-states that have built their economy on slavery. And the leader of one of those nations in particular has sworn to put the Ghost -- who they believe is a man -- out of commission permanently.

Things get interesting for Thirteen when she finds the survivor of a shipwreck. Cord was iced when slavers attacked the convoy he was in and captured his young daughter Miyu. Thirteen believes Cord knows something about her sister, and Cord senses that information is the only thing keeping her from killing him. Thus begins their uneasy partnership in a quest to steal Miyu back.

Green has clearly done her research, and she's done a great job with transferring sailing terms to this new, futuristic environment. I found myself pulling for both Thirteen and Cord, and couldn't put it down 'til I found out what happened to them. Now I'm looking forward to the next book. Highly recommended.
Posted by Lynne Cantwell at 6:00 PM