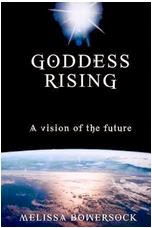 Goddess Rising could be classified as sci-fi, but I wouldn't call it dystopian. It's way more hopeful than that. I'd call it spiritual sci-fi, if there is such a thing.

Little Grace lives in a future on Earth in which a geological holocaust has destroyed our present civilization. Survivors live in communal groups, and they worship the Goddess:


The glory and power of the universe, the Goddess was at once all Love and all Truth, but at the same time She was exacting and uncompromising. She was as constant as the sun and as changeable as the moon, therefore one did well to appreciate Her and give thanks.

One day, Grace learns that she is not who she thought she was. In fact, she is destined to become Greer -- the seer who, legend says, will save her people. She flees into the wilderness, and after a period of hardship and travail, she settles into life in a village in the mountains. There, she becomes apprenticed to a herbalist, and there, too, she learns about sexuality. When she returns to her old home, she has clearly come into her power -- but she is not quite yet done growing.

Bowersock says in the Acknowledgements that she cried when she finished writing this book. I can believe it. Greer's struggle is, in some ways, the struggle of every woman to be taken seriously and to find her place in the world.
Posted by Lynne Cantwell at 6:00 PM