I'll get back to reviewing indie books next week, I promise.

I think I'm going to institute a policy for the next little while of reviewing one trad-pubbed book each month. That will help me with whittling down my stack of freebies from the last World Fantasy Convention while keeping the focus on indie books -- which is where I want it to be. 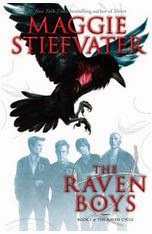 This book had my attention at the word raven in the title. Unfortunately, in the end, that wasn't enough for me.

The Raven Boys is a YA fantasy set somewhere in western Virginia. Blue is the youngest in a family of clairvoyants, but her only talent is to amplify any psychic vibrations present. She's also the subject of a prophecy: she's been told from a young age that she would kill her true love. As you can imagine, that's made her ambivalent about falling for anyone -- a tough order for a teenager.

One night, on graveyard duty with a relative, she's surprised to see a spirit herself. His name is Gansey, he tells her. The bad news for him, Blue knows, is that seeing him in this graveyard on this night means he'll be dead within the year. And since Blue's the only one who saw him, it stands to reason that Gansey is her true love.

She meets him, of course. He's a student at Aglionby, the local prep school for rich boys, whose crest is a raven. Gansey's an odd duck who's obsessed with following the local ley lines, which he believes will lead him to an ancient treasure. He also collects people, among them a local scholarship student named Adam, a troubled boy named Ronan, and a taciturn boy named Noah. Blue has a strict policy against getting involved with Raven Boys, but of course she ends up tagging along on Gansey's quest. Then she starts to fall for Adam, and he for her. There are little hints along the way that she'll end up with Gansey, but the resolution is saved for later novels in the series.

Fans of YA fantasy may really like The Raven Boys. It's a well-written book. But at this stage of my life, I'm pretty much over stories with high-school-aged protagonists unless something else about the book really knocks my socks off, and this one didn't do it for me. Recommended with those caveats.
Posted by Lynne Cantwell at 6:00 PM