Beneath the Tor - Kat Yares 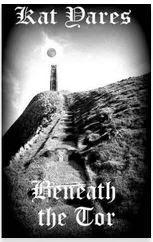 I felt a little subversive, starting this book on Easter Sunday.

You could say that Beneath the Tor is a mash-up of New Testament history and the backstory of the King Arthur legend, but that would be a little unfair. Yares has certainly re-imagined the life and death of Jesus, and along the way, she explains who Mary Magdalene might have been, and why Joseph of Arimathea might ever have traveled to Glastonbury, England.

The main character in this novel is Miriam, a priestess of the old religion as practiced on the Isle of Avalon. She has known Yahshua since they were children, and the two of them are in love. However, Joseph of Arimathea, who is both Miriam's father and Yahshua's uncle, is grooming Yahshua for the role of the Jewish Messiah. Joseph hopes that the Jews who rally around the Messiah will overthrow the Romans and end their occupation of Judea.

I won't go much farther into describing the plot. Suffice it to say that this novel would give Biblical literalists a coronary. Yares has described a very different -- and mostly plausible -- explanation for the goings-on in the early days of the church. I did have some trouble believing that Yahshua would become such a hard-liner as he got older.

So the plot is interesting and worthwhile. Unfortunately, the book could use an editor's careful hand. I found numerous errors in punctuation, particularly in dialogue, and a few terms were used incorrectly. For example, there's a construction technique that's called wattle and daub, but it's referred to as "waddle" in the book.

With a better edit, I'd be pleased to recommend this book.
Posted by Lynne Cantwell at 6:00 PM

Email ThisBlogThis!Share to TwitterShare to FacebookShare to Pinterest
Labels: Beneath the Tor, Kat Yares, review