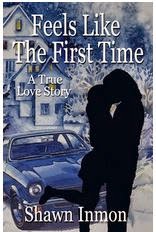 I'll be honest: I'm not a huge fan of memoirs. On the other hand, I think everyone of a certain age has somebody in their past who they would date again in a heartbeat. So on that basis, I decided to give Feels Like the First Time a whirl.

The book opens with Shawn, who's in a miserable marriage that he hasn't had the gumption to end, stopping at a drive-through window on his way home from work. There at the window is Dawn, the love of his life. They had lived next door to one another as teenagers, in the late 1970s and early '80s, in a little town in Washington state. First they were friends; then Dawn's mother hired Shawn to tutor her daughter; and then they fell in love. At this point, Dawn's parents -- well, mainly her mother -- decided the relationship needed to end. A couple of youthful missteps sealed the deal, and the two of them were forbidden to see one another again. But Shawn has never forgotten Dawn, and decades later, Fate steps in to bring them together again. It's not all sunshine and roses, however. The two of them have to figure out just what went wrong back then, before they can even think about creating a happy ending at last.

I'm not that much older than these two crazy kids, so I could really relate to Inmon's depiction of his high school and college years, although I felt like that part of the story went on a little too long. But the present-day portion of the book was wonderful. When Dawn says in wonderment, "You're my Shawn" -- yeah, that got me right in the feels.

I would recommend Feels Like the First Time to anybody who grew up in the '70s and '80s, and to anybody who likes a good love story.
Posted by Lynne Cantwell at 6:00 PM