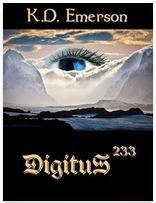 I wanted to like this book. But the story just leaves me with too many unanswered questions -- and that's even before I discovered the ending was a cliffhanger.

The main characters of this dystopian YA novella are Zander and Zeph. Zander, the older of the brothers, has been hoping for years to attend a special leadership camp run by the Digitus Corporation. As the book opens, Zeph has stowed away in the hold of the airplane that's taking Zander to camp. So he knows when his brother and several other young people are dropped out of the plane, still strapped in their seats, while the plane continues to its destination somewhere in South America.

Zander and his fellow campers find themselves stranded on an island in the Arctic, and must figure out how to get back to civilization. Meanwhile, at Digitus headquarters, Zeph learns that his brother's travails are no accident. In the process, he uncovers a lot of information about Digitus -- including its brainwashing techniques and that its ultimate plan is to take over the world.

My biggest problem with this book is that it starts too far into the story. I understand the temptation to wow the reader with an exciting scene at the very start of the book, but you still have to go back and fill in enough backstory to make your reader care about your characters. The brothers' relationship is never established -- they have zero scenes together until very late in the book. Similarly, the boys' parents are mentioned, but only in passing -- we never get to meet them. I have no idea what sort of relationship the kids and parents have. And without that knowledge, it's hard to like, or root for, either of the boys.

Other important things things are left unexplained. For example, the book's title. "Digitus 233" seems to be some kind of post-hypnotic-suggestion-type mind-control command. But how do the kids know it? And what's the 233 for? I don't know any of that, either.

I wouldn't have minded the cliffhanger ending so much if I'd known in advance that the story arc wasn't going to be wrapped up at the end of the book. Folks, if you're writing a serial, please let your potential readers know that upfront.

Digitus 233 is well edited; I only saw a few typos, none of them glaring. The action scenes are well done. But Emerson needs to go back and fill in some of the blanks.
Posted by Lynne Cantwell at 6:00 PM