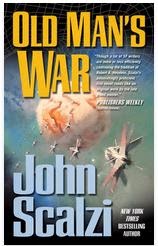 I've read some other books by Scalzi, but I'd never before read Old Man's War, his debut novel. The novel is set on a future Earth in which the elderly are given a unique opportunity: they can sign up with a corporation that, when they turn 75, will give them new bodies and a new career in an interstellar army. They can serve as little as two years. Once their hitch is up, they can settle in any human colony on any planet that strikes their fancy -- or they can re-up. The catch is that they're signing up as infantry; statistically, only one in ten will survive the enlistment period. Oh, and they can never go home to Earth again.

On the other hand, they get downloaded into the bodies of souped-up twentysomething Army men, complete with green skin. As someone who is old enough to have owned a bunch of green plastic Army men, I thought the green skin was a nice touch.

The story is told by John Perry, a former advertising writer whose wife died before she was old enough to join the army. Perry bonds with several men and women before their transformations, and one of the bittersweet subplots has Perry tracking how that one-in-ten survival rate pans out amongst his pals.

I can see why some have compared Old Man's War to Heinlein's work. Scalzi's green army men and women tread some familiar sci-fi ground, including what it means to be human. But the author doesn't delve too deeply into philosophy -- rather, he skims the surface of the big questions while offering the reader an entertaining ride.

I've already picked up the next two books in this series, and I'm looking forward to reading them.
Posted by Lynne Cantwell at 6:06 PM