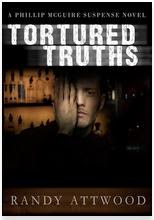 I warned you, didn't I? I said after I read Attwood's Heart Chants that I was going to have to read the first book in the series. Well, I did, and here's what I thought.

Tortured Truths is a very different book from Heart Chants. Phillip McGuire is the main character in both books, but Tortured Truths is the story of how the Pulitzer Prize-winning journalist found his way back to Lawrence, Kansas, and decides to revitalize a local bar. Of course, you can never take the hound out of the newshound, and so McGuire soon finds himself investigating some odd local goings-on: the disappearance of some local kids whose bodies end up in the river with traces of drugs in their system; the strange behavior of the guy who heads the university foundation; and where that same guy is getting all his money. On top of that, he gets romantically involved with a journalism student named Sheila Perez who comes to the bar to do a story on him, and convinces her to write a story about the foundation's funding. Of course, the bodies and the money are tied together, and things get dicey for McGuire, as well as those he cares for, before it's all wrapped up.

I had two quibbles: McGuire occasionally calls Sheila "Signora Perez," using the Italian honorific -- but Perez is a Hispanic surname. I wasn't sure whether he was kidding around, or whether it was a mistake. My other quibble involved McGuire's decision to put Sheila in the middle of everything. I wondered whether that move was morally defensible -- but maybe only another old journalist would have a problem with it. Those two things aside, McGuire is an appealing character whose pain is very real, and the small-town political atmosphere was spot-on. I would recommend Tortured Truths as an enjoyable read.
Posted by Lynne Cantwell at 6:00 PM