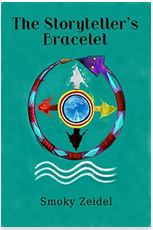 It's the late 1800s in America, and the white people in power are trying to civilize the Indians -- and one way they're doing it is to forcibly remove as many Indian children as they can and send them to boarding schools far away from their homes.

Sun Song and Otter are members of an unnamed desert tribe who fall foul of this policy while in their teens. Sun Song is a storyteller, Otter is a silversmith, and the pair are very much in love. But at the white man's school, they are forced apart, given new names and new clothing, and told not to speak their mother tongue upon threat of punishment.

Otter adapts to his new name, Gideon, and his new life, but Sun Song can't do it. She ends up brutalized by the school's headmaster, and cannot bring herself to tell Gideon what's going on. In the meantime, Gideon has begun to fall for the daughter of a white patron of the school. But the spirits of the land have not deserted them, and Gideon and Sun Song discover they have a role to play in saving the earth for all people.

Zeidel's writing is smooth; her characters are appealing and finely drawn. I was interested in the subject matter anyway, of course, but I was delighted to find the story was so well told. I highly recommend this novel -- and if you enjoy it, too, then you should also look for Zeidel's short stories about this pair: The Boy Who Survived the River and Why Hummingbird is So Small.
Posted by Lynne Cantwell at 6:00 PM