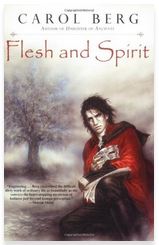 Flesh and Spirit is the first book of a duology that concludes with Breath and Bone.

The main character is Valen, a man running from his destiny. He is a pureblood, which means he has magical ability, and he is also the youngest son of a family of famous mapmakers. But he was unable to learn to read, and rebelled against the family business, finally fleeing to join the military. Dreadfully wounded in battle, he and a buddy named Boreas desert and turn to thievery. Eventually, Boreas abandons Valen near a monastery, trusting that the brothers will heal him -- but first, he steals everything he can from Valen, including the nivat seeds Valen is addicted to. The only thing Boreas doesn't steal is a book that Valen insisted on carting away from one of the houses they had plundered. Boreas sees no value in it, but the joke is on him, for it's a special volume of maps drawn for Valen by his grandfather. And it holds the key not just to Valen's destiny, but to the destiny of their world.

Berg drops her readers right into the story with very little explanation of what's going on, and expects us to keep reading 'til we catch up -- an accepted epic fantasy technique that I found to be less annoying here than in, say, the Malazan Book of the Fallen. And yet, the book starts off slow, partially because of the main character. For a man who's disgraced and nearly dead, Valen certainly likes his flowery prose. As annoying as he is, though, I ended up liking him -- and even pulling for him by the end of the book.

I wasn't as fond of this duology as I was of Berg's Collegia Magica trilogy; I thought Dante made the better antihero, perhaps because he's not a point of view character in the first book or so. But I enjoyed the Lighthouse books, and I recommend them to fans of epic fantasy.
Posted by Lynne Cantwell at 6:00 PM