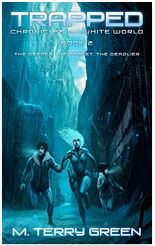 M. Terry Green turns in another fine effort in this second book of her Chronicles of White World.

As Trapped begins, we are back on the Pacifica Ice Sheet with Thirteen and her castaway crew: Cord and his young daughter, Miyu. Thirteen can see her goal on the horizon -- Volcano Helado, where she last saw her sister -- but an impossibly long rift in the ice sits between her crippled skimmer and her goal. Chased by slavers who want to put an end to Thirteen's attacks on their trade, she and Cord debate whether to chance crossing the chasm at an ice bridge. The bridge seems stable enough until Thirteen sends a probe into it to check its thickness. The next thing they know, all three of them are sliding under the ice and into a mysterious colony that resembles the Hotel California in one respect: you can never leave. But if anybody can get them out, it's Thirteen.

Some middle-of-the-series books suffer from being nothing but a bridge between the beginning and the final volume. But Green is the kind of storyteller who knows how to keep things moving. We still don't know a lot about Thirteen's past, and Cord is more of a mystery man at the end of this book than ever. But I'm confident all will be explained in the final volume -- which I'm very much looking forward to.
Posted by Lynne Cantwell at 6:11 PM