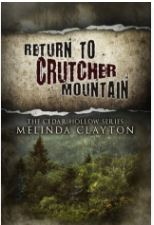 In Return to Crutcher Mountain, Melinda Clayton travels back to Cedar Hollow, West Virginia, to further the tale of Jessie, the troubled, abused girl who was adopted by Billie May Platte in Appalachian Justice. Jessie is an adult now, and has created a successful career in Hollywood as a movie producer. But she still has problems with trusting people -- including the man she's currently seeing.

After Billie May died, Jessie inherited her mountain land. There, she has founded a center for children with developmental disabilities. And now she's called back to Cedar Hollow because of some problems at the center -- problems serious enough that the center might have to close. In rescuing the facility, Jessie may find healing once again, this time with the help of a little boy named Robby who's staying at the center.

Clayton tells her story with a sure hand. Robby's first-person sections are cute, but not overly so. I spent a good chunk of the book rooting for him and hoping he would eventually be able to tell Jessie what he knew about her past. Jessie is properly worldly and self-assured, yet vulnerable. There's a plot twist toward the end that was totally plausible, and the ending seemed to hold promise for everyone.

I'm highly recommending the whole four-book Cedar Hollow series, which Clayton recently released as a box set. You don't have to read them in order -- I didn't -- but read Appalachian Justice first. It explains Billie May's back story, which is key to a full appreciation of the rest of the books.

Posted by Lynne Cantwell at 8:07 PM