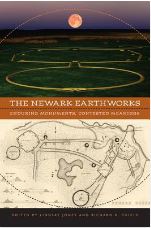 Those of you who read my posts at my regular blog, hearth/myth, know that I've become a teensy bit obsessed with the Newark Earthworks. This complex of earthen mounds and ditches in central Ohio was built by Native Americans 2,000 years ago. Archaeologists today call the builders the Hopewell culture, and suspect they died out after contracting diseases brought to North America by Europeans without ever having come in direct contact with a white man.

The Newark Earthworks, together with other Hopewell culture earthworks nearby, have been added to the short list for designation as a UNESCO World Heritage Site. The editors of this volume, Jones and Shiels, were among a group of archaeologists, historians, cartographers, experts on Native American cultures, and other scholars who gathered in 2006 for the founding of the Newark Earthworks Center at Ohio State University. The members of this group realized that no one had produced a comprehensive book explaining why these earthworks needed the World Heritage designation. This collection of fifteen essays, published this past spring, is meant to be that book.

Some of the essays are kind of dry, as scholarly works can be. But in all, they paint a picture of a remarkable achievement by a supposedly primitive culture. The complex includes two large circles, each nearly 1,200 feet in diameter, and a square and an octagon of similar size -- all joined by wide "roads" delineated by earthen banks. Each structure was placed deliberately to provide sight lines for various celestial events, including a moonrise position that happens only every 18.6 years.

What is also remarkable is how the structures have been preserved over the centuries, even through public use of the land for everything from a county fairgrounds to a military encampment. (Today, the Octagon is part of a country club's golf course.) And the site, which was built as a ceremonial center, is experiencing a resurgence in interest -- not just from scholars, but also from today's Native Americans, including the Shawnee, who called the area home after the Hopewell culture had died out and before their own tribe was force-marched to Oklahoma in the 1800s.

I learned a lot from reading The Newark Earthworks, and I would recommend it to anyone with an interest in the Hopewell culture, ancient structures, or World Heritage sites.